In eastern Wyoming snakes a narrow creek along the vacant landscape, its muddy waters barely trickling from north to south parallel to Highway 18 as the area’s few travelers pay it any mind. In the middle of the creek, on a lonely island displayed modestly beneath the blinding sun, sways a single narrowleaf cottonwood tree in the unceasing gales, the only sign of life above the surface of the dull waters.

Old Woman Creek, they call it. Legend has it the locals named it after seeing the ghost of an Indian woman dancing in the moonlight along the banks. They say she still visits the creek during the full moon every month, and some seasoned elders, gray and haggard from the country sun, even say that the creek runs backward those nights.

I’ve never seen the creek reversed, but I’ve seen it dried up, and from the way the locals talk, that’s the old woman’s fault too. She’s haunting us, they say; don’t go anywhere near that river. They say she lives in that cottonwood tree now and she dances on those banks even still.

END_OF_DOCUMENT_TOKEN_TO_BE_REPLACED

Gus Porter woke from slumber at precisely 5:45 a.m. as he did every morning and sat up in bed, stretching his shaking arms above his head as far as his arthritic elbows would allow, the flab of the skin on his biceps drooping back down into his pajama sleeves. The light was just peeking through the cracks in the Venetian blinds adorned to his frost-covered window, and he yawned to welcome the new day. He groaned with the aches and sleepiness of a man in his ninth decade, and when he swung his veiny legs off the side of the bed into his worn suede slippers and stood up, he walked straight out of the room without turning around to notice thad he had left his body lying prone and deathly still in the bed behind him.

END_OF_DOCUMENT_TOKEN_TO_BE_REPLACED

A couple stands at the intersection holding hands loosely, their fingers intertwined but relaxed, indicative of the stage of their relationship when passion is not their priority but a physical connection is. The girl, who can’t be older than 17, wears a knee-length pleated floral skirt above laced-up leather boots under which her feet are surely sweating in the dry July heat; the boy, who looks even younger with his apparent inability to grow facial hair, holds her hand calmly while fidgeting in his shorts pocket with the other, twisting the cloth back and forth below his fingers. His shirt has a silhouette of mountains on the front of it and a Colorado flag as a backdrop, indicating his tourist status to this mountain town — likely a souvenir from the t-shirt shop down the street. The couple stands at the front of the line watching the cars pass back and forth in front of them, waiting only for the little white neon man on the light pole fifty feet away to tell them it’s safe to walk. She taps her toes twice and draws a circle with the toe of her boot on the unresistant sidewalk; he looks at her and lets go of her hand. They both stand with their hands on their hips waiting to cross.

A bicyclist swerves up next to them, jutting his wheel out into the intersection mere inches from traffic turning right on the adjacent street. He wears a helmet and sunglasses and doesn’t look either direction; he stares only straight ahead, waiting also for the traffic light to become red so he can cross safely. The couple gives him a side-eyed glance as he leans on one foot and one pedal entirely too close to them for comfort. Music blares from his headphones, the cord attached to which hangs dangerously close to his handlebars; first only a faint drumbeat can be heard through the headphones from a few inches’ distance, but when the song picks up it can clearly be identified as “Livin’ On a Prayer.” The girl hears the beat and begins unconsciously nodding her head to it; her boyfriend looks over at her and smiles; she smiles back sheepishly. The music seems to propel the bicyclist, and he inches forward slightly into the intersection but the white neon man doesn’t change for the biker’s will. A row of cars farther down the next block impedes everyone’s views from the oncoming traffic, and the biker is impatient for the light to change. He, too, must wait.

END_OF_DOCUMENT_TOKEN_TO_BE_REPLACED 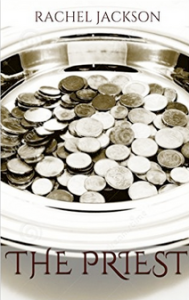 Hello, lovely readers! I have more news for those of you who visit this blog!

I’ve taken the next steps in my writing and publishing adventure:

1. First I’ve just published my novella, The Priest, on Amazon! This is the longest piece I’ve ever written, at 37,000 words, and it was a blast to write the whole way through. Please go check it out!

2. In the spirit of promoting my work, I’ve just made a Facebook page and a Goodreads author page for posting updates and excerpts from my work. I’m just getting the hang of both of these sites as promotional resources, but please check them out and stay tuned.

Thanks for your continued interest! I’ll still be posting poems and short stories here, but it’s been a whirlwind lately with all this other stuff I’ve been invested in. I promise I’ll be back here soon! 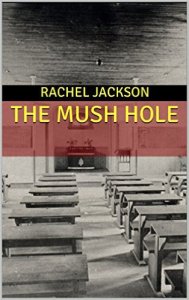 Hello readers! Exciting news on this blog! My story “The Mush Hole” is officially published! I have been working on self-publishing some of my work, and this story I wrote last year is up first! Please go take a look and purchase it if you’re so inclined! (And spread the word!) It’s available for Kindle and Kindle varieties right now, and I will be looking into expanding these options in the future as I get the hang of self-publishing.

And as I begin working on longer stories this summer, I intend to publish those on Amazon as well, and I will put links here that you can follow to find them.

So without further ado, here is “The Mush Hole”!

The rules were simple: there were no rules.

There were no rules, and no restraints; no obstacles, and no limits. As long as she was alive in the end, anything was fair game.

She was in the newspapers for months before she did it. “Performing artist to test physical limits;” “Audience invited to participate in performing art;” “Police caution Mehari against audience violence;” “Mehari eager to explore artist boundaries.” The newspapers ran her name sparsely at first, as just another bizarre art project in the city; then, when the press got wind of the experiment she was about to undergo, it had a field day. Everyone wanted to see her; everyone wanted to talk to her. As the date of her performance drew closer, she receded slightly from the public eye — she wanted to concentrate on her spiritual being, strengthening her resolve for what she knew would be a profound and arduous task.

The night before the exhibit she stood alone in the shadows of the performing arts center, carelessly waving her fingers and hands in the light and watching the shadows cast themselves three times larger against the walls. One set of lights was mounted to the floor 40 feet away from the north wall; two other sets were fixed perpendicular to the first set, creating a box of light where the focal point would be Zahra, standing motionless at the back of the wall. Behind her hung two pieces of wood crossed over each other with strings hanging from either end. She would start by tying herself to those strings against wall, facing the audience head on. Twenty more feet in front of her would be placed a small table with 33 objects on it, one for every year of her life. That was the entire performance.

Tonight, the night before it was to take place, Zahra walked around the room in the shadows, carefully realigning each object on the table exactly the way she wanted them: a ring, a rose, a straw hat, a box, a blanket. On the table next to a set of instructions were all 33 objects, placed in order of increasing lethality, ending with a candle, a scarf, a hammer, a serrated knife, a loaded pistol.

Zahra walked to the table and picked up the first object, then the second, then the third. She became detached from herself, imagining the possible ways a stranger might use each object. She had to be prepared for any reaction from any person who used her, although she told herself she would keep the performance going no matter what.

Her manager, George Kelly, had argued with her the entire planning process of this exhibit, which she called Rhythm 0. Someone is going to kill you, Zahra, he’d shouted, flailing his hands in the air as he walked around her apartment in a frenzy the day after she called to tell him the museum space was booked. Then they kill me, she’d responded blankly. She’d only stared at him before he stormed out with the same widened, steely eyes that would stare back at the audience members who used the objects on her the very next day.

Then they kill me, she repeated to herself now, staring at the objects. Somehow these words meant nothing in her mind now; she knew she could die, and she felt nothing.

END_OF_DOCUMENT_TOKEN_TO_BE_REPLACED

She sat in the train compartment and leaned her head up against the window, her right temple bouncing against the glass as the train lulled and swayed over the landscape outside. With each second that passed and each tree that flew by her vision, Zoya grew more aware that she would never see her home again.

She forced herself to keep her eyes dry and hide the truth, that she was now an exile from the only place she had ever known; but her vacant eyes — dry as they were — betrayed her. She stared at everything but saw nothing, only the images of her love back at home, standing in the doorway of their little apartment as if everything was the same, standing there angelically in the rubble of a destroyed dream.

Everywhere Zoya went, Mashka followed. In the street, in the mirror, on the front step, Mashka was there, or at least the memory of Mashka was. Zoya knew it wasn’t real; she knew the Maria she was seeing in her mind was not the Maria of flesh and blood. She knew Maria was long gone now, her Mashka, the girl with the big blue eyes, who couldn’t bear to leave her family, who couldn’t bear to forsake her homeland, even if it meant becoming another number in the body count or being persecuted for loving the wrong person.

Zoya knew this. She told Mashka to flee with her, to run away — France, Belgium, Italy, anywhere — to escape the impending devastation that the Red Army was sure to inflict, the danger of being a woman in love with another woman. That was a forbidden love back home, and Zoya wasn’t even sure where she was going — wherever that was — would accept her love either. But it did not matter now. Here Zoya was on the train, barreling away on this locomotive far away from her life before. Her eyes focused and unfocused as she rolled by. The farther west she traveled the redder the trees seemed to be in this late autumn weather, as though the Bolsheviks were following her the whole time, their colors poisoning the safety she felt on this train traveling away from the toxic epicenter. But home had become grayer and bleaker to her the longer she was there, growing more war-torn in the days before her departure; it was now a dead country to her, as dead as Mashka would soon be.